The plan to restrict freedom of speech and expression in Nigeria has been gathering momentum since the country returned to democratic rule in 1999. Over the years, successive governments had made several efforts to enact laws that will restrict the rights of citizens of Nigeria to express their views freely.

Freedom of expression is one of the fundamental human rights provided in the 1999 constitution of the Federal Republic of Nigeria (as amended). By same and other international instruments, it is the freedom to hold opinions, receive ideas and information and impact ideas and information without interference.

Social media is used in reference to the means of expression other than the mainstream media. The Global State of Digital report in 2019 revealed that there are 98.39 million internet users in the country.

Among the social media platforms, WhatsApp is the most active social media in the country with 85% of users. The second is Facebook at 78%, Instagram is third at 57%, followed by FB Messenger at 54% and YouTube at 53%. Hence, social media is a critical tool for shaping public discourse in Nigeria. Therefore, this edition of ENGAGE NIGERIA weekly publication critically examines the central issues that surround the proposed social media bill and its implications on the development of the country.

The Context of the Proposed Social Media Bill
On November 6, the bill to regulate the use of Social Media and curb fake news on the internet passed second reading at the Senate. The bill, called, the “Protection from Internet Falsehood and Manipulation Bill 2019 (SB 132)” was sponsored by Mohammed Sani Musa, senator representing Niger east. The bill prohibits statements on social media deemed “likely to be prejudicial to national security” and “those which may diminish public confidence” in Nigeria’s government. The sponsor of the bill claimed that the measure was necessary to prevent the spread of ‘hate speech’ and extremist ideologies through online channels.

Lawmakers championing the bill claim it is necessary for the interests of security, peace, and unity. However, despite these claims, the proposed bill is seen as a hindrance to free speech and a move in line with that of a totalitarian government, as it would give the government the power to block access to the internet if it finds a user expressing views outside of what it deems appropriate.

Reactions of Nigerians on the Proposed Bill
Nigerians on social media are not taking kindly to this bill, with some of them finding ways of putting pressure on the elected lawmakers representing their constituencies. A petition titled “Stop the Social Media Bill. You can no longer take our rights from us” is currently on one of the social activism platforms and over 75,000 of the 150,000 signatures targeted have been obtained.
Pressing further, a Nigerian Twitter user created a thread containing the contact information of the 109 senators at the Nigerian National House of Assembly for anyone concerned to call their respective representatives in the Nigerian Senate.

Nevertheless, on Wednesday this week, dozens of protesters marched to the National Assembly gate to ask the Senate to drop the social media bill. They hoisted placards which among other inscriptions read: “If you can’t stand the smoke. Get out of the kitchen”, “Only a repressive regime muscles the media”, we are not in tyranny century”, “If we can’t say what we think, in a democratic society, then it is not a democracy”, “Do not gag me”. 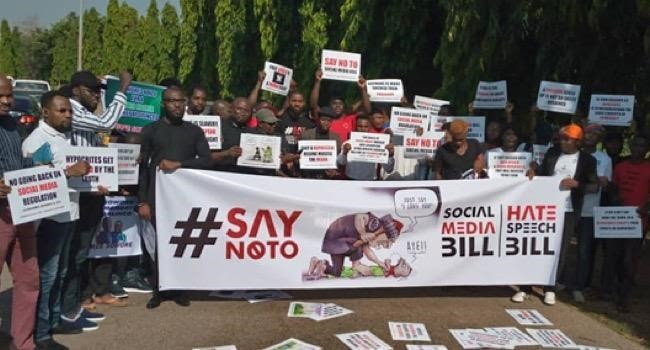 Implications of The Social Media Bill
Since its introduction, the bill has sparked outrage among Nigerians and internet users in particular. The legislation comes a few years after a similar anti-social media bill introduced in the eight Senate sparked outrage across Nigeria. The bill gives law enforcement agents the power to arrest those who are found guilty of spreading false information online. If the law were to pass, those who violate it would be penalised with a fine of up to N300, 000 ($828) or three years imprisonment. On the other hand, corporate organisations that violate the law would be fined N10 million ($276, 103). 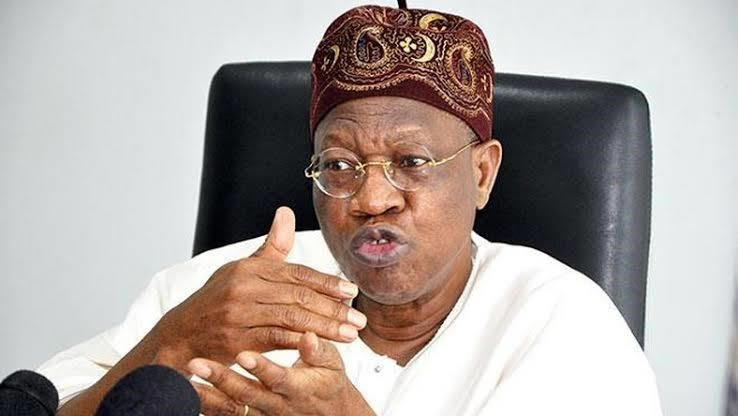 Conclusion and Recommendations
The proposed social media bill has rightly alarmed many Nigerians who are perhaps wondering what is left to regulate again with the existence of the Cybercrime Act 2015. The law, among other things, addressed threats to cyberspaces, including Internet usage and safety with regards to prevention, prohibition, and combating cybercrimes.

The pertinent question here is why the government is so obsessed with regulating social media when they have enough provisions in the constitution to prosecute social media offenders? To address this issue, the National Assembly should suspend the current attempts at introducing such obnoxious legislation to curb access to social media. Secondly, key stakeholders including providers of social media platforms such as Facebook, Instagram, and WhatsApp, etc should strengthen their monitoring tools and collaborate with security agencies to nip threats or dangerous situations that may arise in the social media space in the bud. Thirdly, the National Orientation Agency must sensitise the youth and the general public on the negative consequences of the misuse of social media. Finally, individuals and corporate donors should consider supporting civil society programs that educate the public about negative behaviour on social media.

The government should realize that the international communities are watching; whatever steps being taken must not violate international treaties on human rights that Nigeria is a signatory to. More so, the ruling party, APC should realize that the tenet of democracy places absolute powers in the hands of the electorates. Democracy is the government of the people, by the people and for the people. Therefore, government cannot gag the people if it does not want to risk the peoples vote at the next general elections.

Three Reasons To Give The Remote Control ...

Communication Lessons for the Marketer in African ...

While researching topics related to cryptocurrency and bitcoin in particular, a member of our team found an interesting gaming alternative called Rocketpot.

This growing bitcoin casino site has learned how to successfully apply the rules of entertainment with the accessibility and safety that bitcoin can provide. We consider it an interesting alternative in case our readers are interested in a bitcoin venture or bitcoin entertainment.